It is with sadness and a heavy heart that the Barone Defense Firm announces that on July 24, 2020, Mr. John Fusco, died at his home in Ohio.  He was 77 years old.

John was the CEO and owner of National Patent Analytic Systems (NPAS) in Mansfield Ohio. John was a pilot and had a deep passion for flying. Under his leadership NPAS, located adjacent to an airstrip, successfully procured contracts to manufacture and test aircraft parts for the US Government and others. Also, in 1986 NPAS acquired an early version of the breath test instrument that became the NPAS DataMaster.  Subsequently, NPAS continued to refine and improve the DataMaster and created several different iterations of the device, culminating in the DataMaster DMT, widely considered the best alcohol breath testing instrument available. Michigan and several other states use the DataMaster DMT exclusively for law enforcement purposes, including drunk driving arrests. 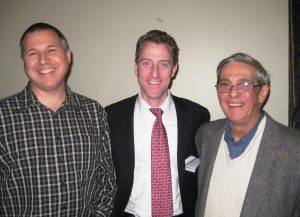 John was refreshingly open and friendly to the DUI defense community. This was unique because all the other breath test instrument manufacturers, including the current owner of the DataMaster DMT, Intoximeters, treat the criminal DUI defense community with disdain. As an example of this, when John was the CEO of NPAS he and Dave Radomski, NPAS’s Vice President and Chief Technical Officer, would periodically invite a select number of DUI defense attorneys from around the country to come to NPAS for a four-day intensive training workshop. In 2005 NPAS invited a group of DUI defense attorneys that included, among others, Patrick Barone, Linda Callahan, William C. (Bubba) Head, Scott Wonder and Chuck Rathburn. The DataMaster DMT was then in beta form, and all the lawyers in attendance were able to test out, explore and learn about this amazing new breath testing instrument. As a result of attendance at this intensive course, the lawyers were certified by NPAS, as “Competent to Operate and Perform Calibration Checks and Essential Diagnostic Verifications on Michigan’s Breath Testing Machine.”  The class was taught by John and Dave Radomski.  No other manufacturer of breath test instruments have ever offered such training to defense attorneys.

Also, John always believed in the science of breath testing and in the integrity of the DataMaster.  His opinion was that there were no secrets, and his company was better off if DUI defense attorneys were well educated about the science underlying infrared analytic breath testing.  John always made himself available to his friends and would freely, openly and honestly answer questions that may arise regarding irregularities discovered relative to the DataMaster calibration and upkeep. He provided his cell phone number and when the DMT was still owned by NPAS it was possible to call him on his cell phone and have a discussion with him about anything related to Michigan’s breath test instrument. Also, a phone call or simple fax to NPAS would result in quickly receiving a copy of 120-day maintenance report, a practice later eliminated by Sgt Perry Curtis of the Michigan State Police. Sgt. Curtis not only eliminated this practice, but required all discovery requests to be made through his office. As a result of this change, NPAS no longer had oversight of the 120-day inspectors. This was all at the time that NPAS held the maintenance contract for nearly all of Michigan’s 200+ DataMaster DMTs, and this change was a predicate to the fraud scandal that later emerged.

After attending training and meeting John at NPAS in 2005, Patrick Barone maintained his 15-year friendship with John.  Over the years the two of them would talk, text and email one another from time to time about various things. In 2008 John assisted Patrick in writing the DataMaster DMT section of his book Defending Drinking Drivers.  Most recently the two of them discussed the failures of the Michigan State Police in their oversight of the 120-day inspectors previously employed by Intoximeter. At this time John had recently been released from the hospital but nevertheless made himself available to discuss the matter by phone and text. He was even gracious enough to review a copy of a proposed legal brief the Firm had prepared in defense of a pending DUI case which included a breath test procured prior to the public announcement by MSP that the 120 day inspection fraud had been discovered.

John was an amazing, generous, and kind man, and he will be greatly missed. He was also an animal lover and cat rescuer.  At the urging of his family, the Barone Defense Firm has made a contribution in his honor to “For the Love of Cats Rescue and Adoption.”