In January 2020 it came to light that employees of Intoximeters, the company retained by the Michigan State Police to maintain all the alcohol breath testing devices used in Michigan’s DUI investigations, had committed fraud. This fraud included the falsification of the documentation necessary to confirm that the breath test units were working properly.  Much has happened and been learned about the fraud in the ensuing 12 months, and this has culminated in the recent filing of a complaint in the Federal District Court for the Eastern District of Michigan by the Marko Law Firm.  The Firm’s Federal Complaint alleging Fraud was filed January 26, 2021.

The device used to test a driver’s breath in every drunk driving investigation involving breath evidence in Michigan is called the DataMaster DMT. In 2006 Michigan purchased approximately 160 of these devices and paid about $6,000.00 per unit.  These devices were intended to replace the aging DataMasters then in use around the state.

The DataMaster alcohol breath test devices were manufactured by National Patent Analytic Systems (NPAS), located in Mansfield Ohio. In addition to making the evidentiary alcohol breath testing units, NPAS also manufactured various other items, including many electronic devices used in civilian and military airplanes. The CEO of NPAS was John Fusco. Nearing retirement, Mr. Fusco decided to sell off the rights to the DataMaster, and unfortunately the buyer was a competitor named Intoximeter.  The sale was consummated in 2013.

This sale to Intoximeter was unfortunate for two reasons. The first is that unlike John Fusco and NPAS, Intoximeters was known to be hostile to the DUI defense community, ostensibly viewing DUI defense lawyers with great enmity. 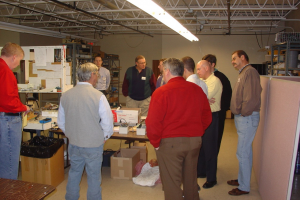 Mr. Fusco on the other hand embraced the DUI defense lawyer community, and even invited a select number of the top DUI defense lawyers from around the country to travel to Mansfield to receive technical training on the science of infrared spectroscopy and the inner workings of the DataMaster device. Barone Defense Firm founding partner Patrick Barone received such training in 2005.  Mr. Fusco also invited to attend this in depth training, such DUI defense lawyer luminaries from around the Country as William “Bubba” Head, Linda Callahan, Scott Wonder, Chuck Rathburn, Jeff Meadows, Fred Slone, Eric Boschenstein and Steve Childress.

The second reason this sale to Intoximeter was unfortunate is that it precipitated the current debacle that is the subject of the Federal lawsuit, including the occurrence of the fraud alleged in the Federal Lawsuit, as is explained below.

It is important to put all of this into its historical context. Before the alcohol breath test results arising out of a DUI arrest in Michigan can be admitted in court, the state must demonstrate that the DataMaster unit used to test the alleged drunk driver’s breath was properly set up, maintained, and kept in proper working order. In fact, the jury will be told that these factors should be evaluated by them when determining whether the breath test results attributed to the alleged drunk driver are reliable. To so assure that the breath test results are reliable the Michigan State Police have promulgated administrative rules that govern the maintenance and calibration of these DataMaster breath test units.

One of these breath test quality assurance administrative rules requires that once every 120 days a “Class IV” DataMaster operator must inspect the device and confirm that it is in proper working order.  The Class IV operator will, among other things, check the calibration of the subject DataMaster, and if necessary, will re-calibrate the device.  Upon completion of their inspection, the 120-day inspector will prepare a form to verify that he has completed the necessary inspection.  He will also place his signature in the DataMaster calibration logs kept by the police department where the subject DataMaster is in use. Prosecutors seeking drunk driving convictions always admit these logs into evidence for the jury’s consideration. These calibration verification logs are an important if not essential piece of the prosecutor’s evidence used to prove the driver was intoxicated.

Prior to the 2013 sale from NPAS to Intoximeter, these 120-day inspection reports were sent directly to NPAS and John Fusco would review every one of them before filing them in his office. And, because Mr. Fusco was friendly to DUI defense attorneys, if requested, he would send out the 120 day report directly to the defense attorney requesting it, no questions asked. Mr. Fusco believed in his DataMaster instrument, believed in the science, and believed he had nor should have anything to hide.

Formerly, Sgt. Perry Curtis was the head of the Michigan State Police’s breath test unit. He achieved this position late in his career as a Michigan State Trooper, and at some point, after he began acting in this capacity, changed the above procedure. Henceforth, according to the Curtis edict, the 120-day inspection reports were no longer sent to DataMaster, and instead were sent to him, care of the Michigan State Police.  On information and belief, this change is what precipitated the opportunity for fraud, because the 120-day reports, and therefore the 120-day inspectors, were no longer being properly supervised, and presumably their reports were no longer being scrutinized by an independent third party.

What is the Nature of the Fraud alleged?

One of the consequences of the sale of the Datamaster by NPAS to Intoximeter was that the 120-day inspectors formerly employed by NPAS become employees of Intoximeter.  Eventually, Intoximeter also brought in three new 120-day inspectors. In 2019 it was discovered that one of them, operating primarily on the west side of Michigan, had falsified some records to make it look like he had performed a timely 120-day inspection when he had not.

This discovery was made in the context of another important change; Sgt Curtis had retired, and a new leader by the name of Mark Fondren.  Strictly speaking, Mr. Fondren did not was replace Curtis as such because he had a different title and a slightly different role. The primary focus of this newly created position was to perform a similar but more technical role than that filled by Curtis who had only a high school education.  Mr. Fondren is a Master’s level toxicologist from Texas who was brought into the Michigan State Police breath test quality control unit to help them achieve accreditation. To that end, Mr. Fondren began an audit that included a review of several years’ worth of 120-day inspection reports. This revealed that additional fraud, similar to that uncovered in Western Michigan, existed in several other places in Michigan. At this point Fondren knew or must have known that the fraud was no longer isolated to a single proven instance and was instead, that he was looking at a DataMaster breath test quality assurance tsunami. One that if improperly managed could result in a title wave of DUI dismissals.

However, if Mr. Fondren quickly uncovered such additional evidence of fraud, he failed to publicly disclose it. Instead, it appears that he kept it under wraps and in at least one provable example, failed to disclose it to the Court or to the defense when he testified in Clarkston on behalf of a prosecutor in a drunk driving prosecution. This testimony occurred in mid-January 2020, immediately before news of this fraud made the weekend news cycle. On the Friday prior to this news break weekend, instead of being transparent, and acknowledging the fraud, Fondren took the witness stand, swore to tell the complete truth, and said nothing. Furthermore, he testified in that case that he reviewed the subject 120-day reports and had found them to support the prosecutor’s position that the breath test result was reliable.

Once the news broke and Mr. Fondren and the Michigan State Police were forced to disclose the existence of the fraud publicly, he and the Michigan State Police engaged in various forms of damage control. Such “damage control” has included testifying in support of the admission of DataMaster alcohol breath test results in various courts around the state. In this testimony Mr. Fondren consistently suggested there was “nothing to see here” and despite the Fraud, the breath test results in question were reliable. He would testify to juries that the test results in question were nevertheless always reliable.

While Mr. Fondren’s testimony has largely resulted in the subsequent admission of the contested breath test results, and therefore the conviction of the accused drunk driver, this has not always been the case.  For example, in once recent drunk driving prosecution, this one in the 52-4 District Court in Troy, the presiding Judge not only suppressed the breath test results, but had this to say about Fondren’s testimony in favor of the State:

During cross examination, Mr. Fondren was contradictory, argumentative, and evasive.  Moreover, the substance of Mr. Fondren’s testimony undermined his credibility.

Then, as it related to Mr. Fondren’s oblique testimony relative to a possible violation of the court’s sequestration order, the same Judge indicated:

Consequently, Mr. Fondren’s testimony is suspect based on his lack of transparency and lack of candor.

Those are incredibly strong word coming from a Judge, but accurately reflect the opinion of the DUI defense lawyer community at large.

What Will the Federal Lawsuit Accomplish?

Mark Fondren, along with Sgt. Perry Curtis, Intoximeters and several others are being sued for damages. So, one thing it will accomplish, if successful, is the punishment of the alleged wrongdoers. The lawsuit also requests, without specifics, that the Federal District Court Judge find that the defendants individually and/or collectively violated “the rights guaranteed to Plaintiff under the U.S. Constitution, Federal law, and State law.”

However, what is most intriguing to contemplate is the ripple effect of this lawsuit. Unlike a defendant in a criminal case, a plaintiff in a civil Federal lawsuit has many powerful discovery tools at their disposal.  Without question this lawsuit has the potential to “blow the lid” off the Fraud, and this will hopefully inure to the benefit of many Michigan citizens, who, like the lawsuit’s plaintiff Kerry Miller, are wrongfully accused and perhaps wrongfully convicted of drunk driving.