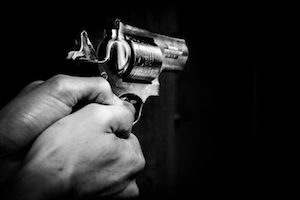 Michigan’s Castle Doctrine of self defense provides that under certain circumstances you may legally use both deadly and non-deadly force against an intruder in your home.

Also, that if you kill such an intruder, you will be protected against prosecution by a presumption that you acted in self-defense.

Before you use deadly force there are several important things for you to know. A paraphrase of the Michigan Castle Doctrine of self-defense says:

If a person is in the process of breaking and entering your home (or business or vehicle), [to remove a person or property] or has already broken and entered your home and is still present in the home, or is unlawfully attempting to remove another person from your home against their will, you may use deadly force if (and only if) you honestly and reasonably believe that the individual (you shoot dead) is engaging in the described conduct.

A Breaking and Entering or Home Invasion Must be Occurring

This unfortunate and narrow “objective requirement” for this defense of home law arises out of the case of People v. Wafer. In this case, the court began with the proposition that a successful claim of self-defense “requires a finding that the defendant acted intentionally, but that the circumstances justified his actions.”

What is the Castle Doctrine Presumption / When Does it Apply?

The text of this Michigan self defense law specifically indicates that a shooter is entitled to a rebuttable presumption they acted in self-defense if they have “an honest and reasonable belief that imminent death, sexual assault, or great bodily harm to himself or another, will occur” only if the individual against whom deadly force is used is:

What About the Honest and Reasonable Belief?

For the Castle Doctrine to apply, you must honestly and reasonably believe at least one of the three things listed above.

If the Castle Doctrine does apply, and you are being charged or investigated for a crime, then you won’t have to prove that you were afraid of being seriously hurt, raped or killed. It will be presumed that the you honestly and reasonably had such a belief. When you have a claim of self defense, this presumption is a powerful protection afforded by Michigan law. This presumption does not exist with a Stand Your Ground self defense. When Will the Castle Doctrine Presumptions Will Not Apply

Another thing to know is this; even if you have self-defense based on the above criteria, there are instances when the presumption still doesn’t apply. For example:

The law of self-defense of home is complicated and use of deadly or non-deadly force is always fraught with legal peril. If you keep a firearm in your home and intend to use it in self-defense, it is important that you be well informed about the law, and well trained in the use of force.

You may also wish to consider the use of force insurance to cover the cost of your legal defense in the event that charges are brought.

Hire The Michigan Self Defense Experts

In a recent media appearance, Michigan self-defense lawyer Patrick Barone explained Michigan’s self defense laws, including the difference between the Castle Doctrine and the Stand Your Ground Law. The title of the article is Lawyer explains Michigan’s Castle Doctrine law: When you can and can’t shoot an intruder.

If you are facing charges arising out of a self defense incident, contact the 2nd Amendment self defense lawyers at the Barone Defense Firm. We offer free no obligation consultations and answer the phones 24/7.