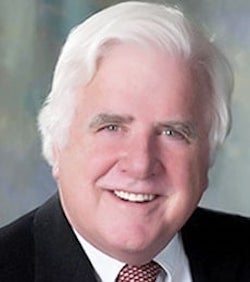 Prior to joining the Barone Defense Firm in 2013, Mr. Corbett spent several decades prosecuting complex financial crimes in the United States Federal Courts. For much of this time he was the Chief of the Organized Crime Strike Force for the United States Attorney’s Office. In this capacity he led the effort to convict the top leaders of racketeering and other charges and because of his department’s success, Mr. Corbett is largely credited with dismantling the Detroit Mafia. Most recently, Mr. Corbett was appointed as a Special Prosecutor to assist with the investigation of possible financial crimes associated with the Flint Water Crisis. Mr. Corbett brings this fearless brand of trial, litigation and leadership skill to the Barone Defense Firm’s Federal Crimes practice.

The son of a New York Police Officer, Mr. Corbett has been described by one of the many newspapers that featured him as “a cocky, street-smart Irish kid from Brooklyn.” After graduating in 1967 from a seminary with plans to become a priest, Mr. Corbett enrolled at Canisius College in Buffalo, where he obtained a political science degree in 1971. Then, in 1974, he graduated from the Notre Dame Law School in 1974 and was soon admitted to the Michigan Bar. His first government position was with the Oakland County Michigan Prosecuting Attorney’s Office. After a short stint with Oakland County Mr. Corbett joined the United States Attorney’s Office, where he spent the next three decades as a District Attorney.

Mr. Corbett was honored by receiving the Executive Director’s award for “Outstanding Trial Practice” from the Executive Office of the U.S. Attorney. Mr. Corbett has tried thousands of criminal cases at both the state and federal levels. Many of these cases were extraordinarily complicated financial crimes involving many dozens of boxes of evidence. It’s been said of Mr. Corbett that “he can try cases with little preparation yet recall key evidence with lethal precision.”

Because of his superior trial strategy and record of courtroom success, Mr. Corbett has been asked to teach trial tactics to attorneys at the University of Michigan School of Law and at The Department of Justice in South Carolina, Brazil, Uzbekistan, and Germany.

In His Own Words

I have been practicing law for more than 40 years now and for 35 of those years, I was a prosecutor—mostly in the federal system—for about 31 years. When I retired from government service, my area of expertise was criminal law, particularly federal financial fraud cases. As a defense attorney I didn’t really feel comfortable representing drug dealers, and organized crime figures. Instead, I decided to exclusively handle crimes where I could use the skills I had developed as a prosecutor and trial attorney in a context that would make me feel personally comfortable. Many doctors and lawyers that find themselves at the wrong end of a federal indictment are good hard-working people who made mistakes. This is why I handle white collar crimes such as health care and prescription fraud, billing fraud, Medicare fraud and the like. I also have a great deal of transferable experience that will allow me to work in the defense of public corruption charges, gun law violations and medical marijuana. With these crimes too the people we represent are solid citizens who may be falsely accused, or who may have made a poor decision one day and we do not want to see their lives ruined because of that. I believe that people shouldn’t lose their entire lives for one mistake. So, I enjoy the opportunity to help people overcome a poor decision, and move on, and put themselves in a position where they can go forward with their lives. Plus, I have the luxury of being able to decide what cases to accept and which to pass on.

For your FREE lawyer consultation, call today to learn how to protect your yourself from a possible unwarranted conviction. What do you have to lose, when the free legal advice with our litigation team’s criminal lawyers near me can answer many tough questions?