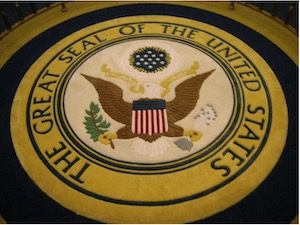 In 1970 the United States Congress pass a law that has come to be known by its acronym: RICO. This stands for the Racketeer-Influenced and Corrupt Organizations Act, and at the Federal level can be found in Chapter 96 of 18 United States Code, 18 U.S.C. §§ 1961–1968.

There are 35 separate crimes associated with the RICO act. One of the main purposes of the act was to allow organizations to be prosecuted rather than just individuals. This law is litigated at the Federal District Court level.

Federal criminal procedure differs from State criminal procedure . For example, you will face prosecution under RICO only after a Federal Grand Jury has evaluated the evidence and found that you probably committed the crimes alleged. We have written elsewhere about how the Federal Government decides who to charge in cases like this.

The purpose of the RICO laws in 1970 was to help the government fight organized crime and other organized group related violations of the criminal laws. It is an organized crime control act that can sometimes involve things other than just financial crimes, such as murder and kidnapping. Wire fraud is another common adjunct crime under the RICO statute.

RICO charged are often brought against individuals and/or organizations that have collectively committed acts of racketeering activity or otherwise been engaged in organized crime. In this way, RICO laws are closely associated with conspiracy laws. Since this time clever and creative prosecutors have found innumerable ways to apply this powerful weapon to the activities of both individuals and small businesses. Even those who may have accidentally violated the law, or even those who committed no legal violation at all.

Another problem with RICO at both the state and federal level is that the target is the organization or enterprise, not the individual. However, if the organization is found liable, then many of the individuals associated with that enterprise will be personally liable for violation of the criminal laws. This means that individuals can be found guilty of crimes they did not personally commit. Such allegations can be brought if the prosecutors believe they can show that you played some significant role in the criminal enterprise.

RICO involves interstate commerce and involves crimes that affect interstate commerce. Racketeering activity requires that the alleged offenses be carried out for an enterprise's financial gain. If this pattern of racketeering activity is proved, anyone involved in the enterprise can fall under the jurisdiction of organized crime laws. Individuals can be found guilty of crimes they did not personally commit, if the prosecutors can show that they played some significant role in the criminal enterprise.

RICO and its Michigan equivalent have given the authorities enhanced powers, and they have used them aggressively. Prosecutors can seek forfeiture of property and assets, as well as lengthy prison terms. They can also seek treble damages. This means that for every dollar of actual damages that are found by the court, the defendant can be ordered to pay three dollars.

The court can also order the defendants to forfeit other property of equivalent value. This can occur if the property that was derived from the alleged racketeering is outside the court's jurisdiction, has been sold, or cannot be found, 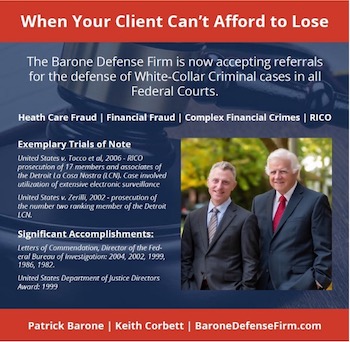 In addition to providing for extended criminal penalties, RICO also allows for a civil cause of action . In a civil RICO charge, the alleged victims of the illegal acts can sue a person, a group of people, or an ongoing business enterprise. Such cases can become complicated quickly.

The Michigan penal code like many other states, has enacted a similar law. Michigan’s RICO act is found in Act 328 originally passed in 1931. The Michigan RICO act can be found at 750.159g, et. seq. This act is prosecuted at the State Court Level.

Finding a Skilled and Aggressive RICO and Racketeering Lawyer in Michigan

If you encounter law enforcement in conjunction with RICO-related charges, you could be looking at very serious, potentially life-threatening ramifications.

That’s why you need the help of a Michigan RICO attorney with the knowledge and experience to help you navigate this complex situation. This is true even if you believe that you conducted or participated directly in the activity alleged by the Federal Government.

You need a skilled defense attorney who can provide you the clear information you need to understand all your options. The lawyers at the Barone Defense Firm have decades of collective experience defending RICO charged at the State and Federal court level.

The lead RICO attorney at the Barone Defense Firm is Keith Corbett who spend more than 30 years prosecuting various members of Detroit's Mafia. For more than 20 years Keith Corbett was the head of the Federal Government's Organized Crime Unit in Detroit's Eastern District. No other Michigan RICO and Racketeering attorney has Mr. Corbett's wide breadth of experience handling these kinds of cases.

Consulting with a RICO and Racketeering Attorney

One of the most important aspects of the lawyer client relationship is that of confidentiality. Everything you discuss with your lawyer will be kept private, and your lawyer's job is to serve as your advocate – not as your judge.

A Michigan RICO attorney from the Barone Defense Firm will listen carefully to every aspect of your story. We will then clearly lay out what your options are and provide you with the most vigorous defense possible under the law. If you are facing possible RICO penalties, whether criminal or civil, contact an experienced attorney as soon as possible.