How Does the Weed Blood Test for DUI Work?

Few criminal attorneys really understand the answer to this question. There have been many important changes to the way the Michigan State Police Forensic Laboratory conducts their blood tests in drug cases like driving under the influence of marijuana. As of October 10, 2022 the lab has suspended testing for cannabis because their test can’t tell the difference between active THC and CBD.

However, in a blood test for active THC, the process starts with a blood draw. The blood is typically drawn from a subject’s forearm or elbow pit area into two BD Vacutainer Tubes. This specific tube should also include two other substances, an anti-coagulant, and a preservative. This box is then sealed with your blood inside, and sent by mail to the lab.

Once the box is received at the State Lab, the contents will be removed. Any evidence of leaking or spoliation will be noted. The sample will be given a number for tracking purposes. Next, it is placed into a refrigerated storage room until testing.

Preparation of Blood in a DUI Marijuana Case 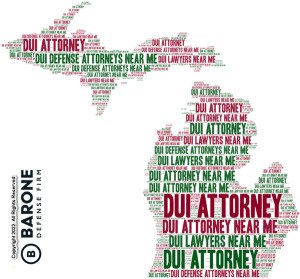 On the day the blood is tested, the blood samples will be removed from refrigerator storage and brought to the workspace of the forensic analyst. As noted, two tubes are drawn, but only the first tube drawn will be analyzed at the lab. This first tube will be removed to begin the process and will be prepared for testing.

Preparation includes pipetting a specified amount of the blood and substance mixture into a new tube, and a volatile substance known as an internal standard will be added to it.This tube prepared by the analyst now consists of an anti-coagulant, a preservative, the drawn blood, and this volatile substance.

Testing of the Blood in a DUI Marijuana Case

This mixture will be heated at a constant temperature until a vapor, or a gas is created above the liquid portion. This is known as head space gas.

This headspace gas is then automatically withdrawn from the tube and injected into the testing instrument by the Auto-Sampler. Once injected, a carrier gas, “pushes” gas through the instrument. The blood sample is tested twice.

Measurement of the Blood in a DUI Marijuana Case

When blood is tested for marijuana, the lab uses a mass spectrograph (MS), which breaks the separated molecules apart to identify them. This creates what is loosely called a fingerprint. In the case of a DUI test for weed, if the MS shows a molecule in your blood that matches the “fingerprint” for THC, then you can get a DUI for weed.

Law enforcement is on the lookout for drivers high on weed. If you are charged with a DUI cannabis case in Michigan, call the Top DUI lawyers at the Barone Defense Firm for your free, no cost review.