Your lawyer may ask you to obtain a character letter for court purposes.  This article explains how to format and write such a letter. You can share a link to this article with those you ask to write such letters. While there are many suggestions here, what’s missing is a sample character letter or a form character letter.  This is because utilization of a form will cause all character letters to look substantially the same, and this defeats the whole purpose and is counter-productive.  Use of such forms is strictly discouraged.

Also, for many people, being involved in the Michigan criminal justice system is a new experience, so let’s start with some basics and a discussion of how such letters might be used by your lawyer.

At some point while your case is pending your lawyer may wish to engage in plea negotiations with the prosecuting attorney. There are many ways such negotiations may transpire. One option would be for your lawyer to write a letter to the prosecuting attorney stating the many reasons why a reduction in charges would be appropriate. Good character letters can help your lawyer make a strong case for a reduction. In this scenario, your attorney may include your character letters as “exhibits.”

Another option would be for the plea negotiations to take place in person, by phone, or in court during a pretrial. In these scenarios, copies of your character letters can be provided directly to the prosecuting attorney, in person or by email.

Character Letters for Use During Sentence Negotiations

There is a small amount of overlap because prosecutors can make sentencing recommendations to the judge, but in the end sentencing discretion resides completely with the judge presiding over your case. Also, while it is the prosecutor’s prerogative to offer a reduction in the charges, a judge can, in some circumstances, refuse to accept a plea offer made by the prosecuting attorney.

Another way character letters can help during sentence negotiations is as attachments to a sentencing memorandum. The Michigan Criminal Defense Lawyers at the Barone Defense Firm often file extensive and detailed sentencing memorandums as part of an overall effort toward sentence mitigation.

How to Format a Character Letter

Format – whenever possible, character letters should be in business block format, on the author’s letterhead, and include a date, an inside address, including an email address, and a telephone number. This contact information can be added below the signature line where authors name is printed, or as part of and just under the author’s street address. Character letters also be signed by the author. Here is a link to a resource that shows various formatting options. Please refer to this link for 3 examples of how to properly format a character letter. Ideally, at a minimum, the letters should include the judge’s name, and a case reference, and be formatted as follows: 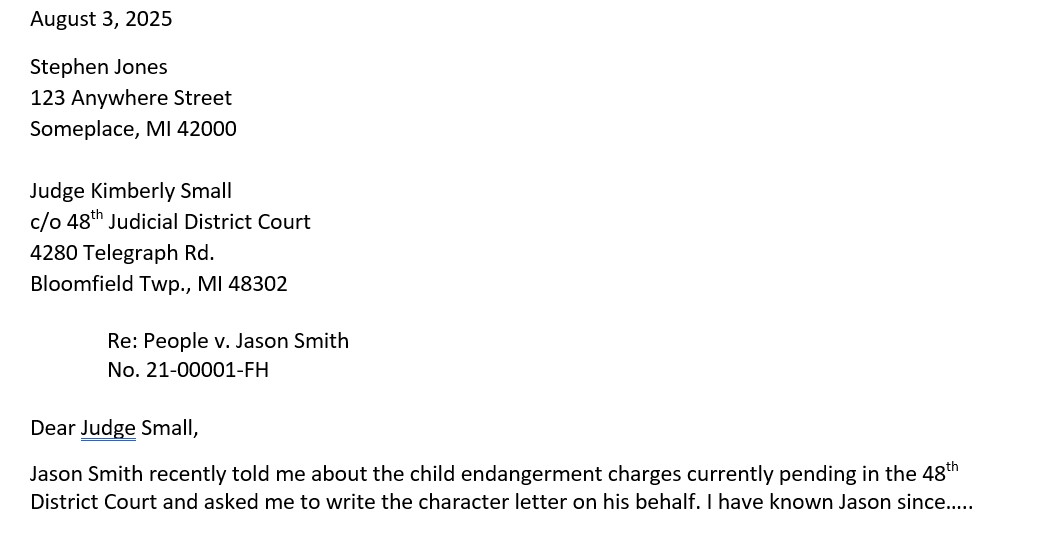 Here is a partial list of what to include in a character letter for use in court:

Introduction – the author should indicate who they are, how they know you and how long they’ve known you. Here is an example; I am currently employed as a physician’s assistant and have known Mr. Smith (or Jason) for 7 years. We met when we were both undergraduate students at Michigan State University. At the time Jason was studying engineering and he was my calculus 101 study partner.  His math skills were better than mine, and thanks to him we both got A’s in the class.

Background Information – Character letters should also include a summary of the author’s understanding of the case, including their knowledge of the charges you are facing. This section might read; Jason recently told me that he is facing a child endangerment drunk driving charge. He has also confided in me that he has a prior arrest for MIP from 2001 when he was living in the dorms at MSU.

Body of the letter – This section might be several paragraphs, and this is where the author will recite their opinion of your character.  The more details that can be provided, the better, and the details should be related to the pending charges. If there are prior convictions, then it would not make logical sense to suggest that Jason’s new offense is out of character. The new offense may nevertheless not be reflective of Jason’s true character.

Consider the public policy – Also, when writing the letter, the author would be well served to consider the public policy behind our State’s criminal laws.  At its core criminal laws are designed to punish people for behavior that places others in danger or that is socially unacceptable. Criminal laws are therefore arguably related to elements of virtue and morality. Consequently, the character letter is designed to explain how the charged behavior is not reflective of your true nature, which is otherwise virtuous. Said a little differently, the character letter is designed to to demonstrate why, despite the charges you are facing, you are, nevertheless, a good social citizen. In this light, examples of positive personality traits include honesty, integrity, selflessness, accountability, disciplined, etc.

The author’s character opinion – your author will indicate their opinion of your character, meaning the personality attributes they believe you possess, along with details in support of this opinion.  The more details the better. And the details should be related to the charge. For example, if the charges involve drugs or alcohol, recount a time when everyone was drinking heavily but you exhibited self-discipline and control and had little to drink, such as at a stag party, wedding reception, and so on.

Reference other positive behaviors – if you volunteer your time every Thanksgiving to work in the soup kitchen, visit the elderly, contribute to or work for volunteer groups, and/or in any other way “give back” or “pay it forward” be sure to have the author include this information as well provided they have personal knowledge of these facts.

Reference post-arrest behavior – this is perhaps the most important section of all. In the case of the fictitious child endangerment DUI case, what steps have you taken to explore and address an underlying substance use disorder?  Are you attending a 12-step program?  If so, can your author write about their knowledge of this participation? Again, details are important. “Jason has talked to me his working the steps and has confided in me about his struggles with step 3.  Jason is a very self-reliant person, and it’s hard for him to give up control to his higher power. I can see however how hard he is trying, and as he continues to work the steps, he seems more at peace and less anxious than in the past.”

Conclude with Rehabilitation – Looking again at public policy, the ostensible goal of the criminal justice system is rehabilitation. To assure the wrongdoer won’t re-offend. If the author believes this to be true, have them state why. Ultimately, it’s a question of how you deal with or have dealt with adversity. Think in terms of the character Jean Valjean in Les Miserables. Jean stole a loaf of bread, then had time added for trying to escape. Nevertheless, because of his work ethic, stamina and self-determination, he rose above his abuser and became a success thereby helping many people unbound himself. Can your author think of some similar adversity you survived? If not, relate it back to post arrest efforts toward rehabilitation. Again, this should all be stated within the context of the crime charged. So, returning back to child endangerment, have you made an earnest effort toward sobriety and recovery while your case is pending?

Other Considerations for a Character Letter

Where to send the letter – character letters should be sent to your attorney for review.  They should not be sent directly to the judge or prosecutor.

When to send the letter – your lawyer will tell you your timetable and explain to you when the letters are “due.”  It will be your responsibility to assure that your authors comply with this timetable.

How many letters to collect – there is no set rule here, but a minimum of three is a good starting point. Your lawyer is likely to use no more than six letters, and if you collect more than six, your lawyer will select the most persuasive from among them.

How long should the letter be – again, there is no hard rules, but try to be sensitive to the judge’s or prosecutor’s time.  A rough rule of thumb is not longer than one page, with one inch margins and 12 point font. Be mindful of the adage: I’d have written a shorter letter if I’d had more time…..” and carefully edit the letter to include only the most essential information consistent with the advice given in this article. And avoid repetition.

Be scrupulously honest – be sure to caution your authors to only relate what is 100% true.  Judges are just that, judges, and their job causes them to become very adept at judging if and when your authors are exaggerating or outright lying. Put more colloquially, judge and prosecutors have excellent B.S. detectors, so as much as your authors may want to help, anything less than complete honestly is very likely to backfire.

Who to ask for character references – the best character references are the people who know you best. The list might include friends, family, co-workers, support group participants, therapists, clergy, fellow congregants, coaches, teachers, and spouses. Yes, many of these people will want to help you and have an incentive to only write nice things, provided their letters are honest and supported with details, they should nevertheless be highly effective.

Don’t suggest a sentence or outcome – leave this as an implicit rather than explicit conclusion. Instead, your author might simply thank the reader for his/her time. The author might also suggest that the reader contact him/her for more information or for clarification of anything previously written.

You should work closely with your lawyer as you collect your letters.  If you’ve been charged, but are not yet represented, then contact the Michigan criminal defense experts at the Barone Defense Firm for your free case review.