Most Michiganders know the OWI meaning, which is our state’s generic acronym for operating while intoxicated. When alcohol is not the impairing substance, however, a related but different MI OWI crime sometimes called “drugged driving,” can be committed by a motorist in Michigan.

Three quick informational points about drugged driving and drunk driving cases need to be made by drug charge attorney Patrick Barone. By clarifying these issues now, such information will help the reader understand more about OUID cases.

First, in the USA, DUI vs DWI represent the abbreviations used in the largest number of states, as their preferred acronym (over 40 states and the District of Columbia). The use of “DUI lawyers” or DUI attorneys” (or substitute a “W” for the “U”) will be used in these states, (e.g., Texas DWI lawyer near me, South Carolina DUI attorney). 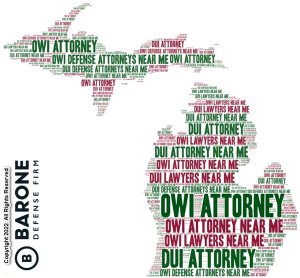 DWI vs DUI, and other acronyms in various states. The other 10 states and use either OWI, OUI, OVI, DUII, DWUI or similar versions, and Michigan is one of those states.

Second, even though most states use DMV, DPS, BMV, DDS and other acronyms, Michigan, Illinois a few other states have their driver’s license issuance, registration, and revocations are run through the Office of the Michigan Secretary of State. So, the state driver’s license agency is sometimes abbreviated “SOS.”

Third, the roadside field sobriety tests that you may have been given are inapplicable to DWI-DWI drugs cases. During your free consultation, you’ll be asked to describe which “exercises” you were required (by police) to attempt to do. It is also comforting to know that over 90% of all prosecutions are for misdemeanor charges, only requiring the legal services of our misdemeanor attorneys.

OUID Meaning – Operating Under the Influence of Drugs

OUID stands for Operating Under the Influence of Drugs, which is generally viewed and treated by the state in the same manner as all other impaired driving offenses. As a result of the smaller number of OUID arrests, our Barone Defense Firm team of drunk driving attorneys handle many more OWI (operating while intoxicated) and OWVI (operating while visibly impaired) criminal traffic charges than we do OUIDs.

Sometimes also referred to as “impaired driving,” (due to ingesting drugs before operating a motor vehicle) under Michigan laws, the same DUI-OWI penalties apply to these drug-related driving charges. Yet, OUID drug crime charges represent fewer than 1 in every 12 “driving under the influence” or “driving while impaired” OUID-DUI arrest cases in the Great Lakes State.

Certain types of drugs cannot even be present in trace amounts in your system. These are the totally contraband drugs like PCP, LSD, and peyote.

Misdemeanor vs Felony OUID Distinctions. For any Michigan driver with two prior drunk driving or DUI-drug convictions, a third lifetime OUID violation is treated the same as if it had been an O.W.I. Any drunk driving lawyer in MI can tell you that third offenders (within their lifetime) are prosecuted as felony cases in Michigan.

When your case is a Felony vs Misdemeanor. In addition, when an intoxicated or impaired driver is in a roadway crash, the consequences of that wreck can cause grievous injury or death to others. In such arrests for drugged driving or drunk driving, a serious felony motor vehicle crime can be accused, even if that drugged driver is only a first offense DUI-OWI-OUID offender.

These serious drug crime attorney cases require top legal counsel to be handling the cases as your OWI-drugs lawyer. In no other cases will the selection of an award-winning drug charges lawyer become as critically important. The criminal defense issues for such felonies can result in lengthy state prison sentences, potentially. (See the last two rows on the helpful Michigan OWI-OWVI-OUID penalty chart shown below). 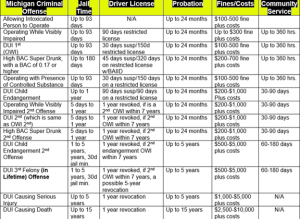 Thus, the reader can see that Michigan laws (with any felony charge) carry severe punishment. Another Michigan enhancement law boosts the potential 15 years shown above to 20 years if the deceased victim is a police officer, EMT, fire safety officer, or a similar “first responder.”

In addition, as in many other jurisdictions in the United States, our various states’ laws call for driver license suspension in any drug-related convictions, including O.U.I.D. convictions. A six (6) month loss of driving privileges follows any first offense OUID conviction.

Once the applicable license suspension period has passed (e.g., 6 months on a 1st offense, and 12 months on a 2nd drug conviction of any type) that driver may seek to have the Michigan SOS restore full driving privileges. This requires payment of a reinstatement fee. Some drivers may need the assistance of a suspended license attorney and drug crime lawyer if other license sanctions exist that complicate that reinstatement.

The State of Michigan’s “zero tolerance” policy regarding drivers using impairing drugs and operating any vehicle is now being reviewed, since recreational marijuana (in many states, including MI) is being allowed. Many drivers may not have any psychoactive THC in their system, even if they smell like marijuana.

To read the Michigan laws on this topic (DUI cases), click the link below for the wording of M.C.L. 257.625, and read the latest statutory provisions. OWI offenses and OUID crimes are addressed in various subsections of this statute.

This is especially important considering Michigan’s 2018 legalization of recreational marijuana use, which has raised serious legal concerns regarding the use of drugs and driving. OUID charges fall under the category of OWI violations listed in MCL 257.625.

Additionally, in 2021 the Michigan Legislature set up a roadside drug testing pilot program to try to gather more information on impairment levels of marijuana users.

To Do All Possible to Avoid a Jail Sentence, Speak to One of Our Drug Possession Lawyers Near Me

Michigan DUI lawyer and drug defense attorney Patrick Barone can be reached at the Barone Defense Firm law office at 248-306-9158. Call us today, and that means 7 days a week and on holidays, for your FREE lawyer consultation with a criminal defense lawyer near me, who can cover the entire State of Michigan.