Fraud vs Embezzlement. Any embezzlement or fraud conviction would be a “crime of moral turpitude,” which can block you from obtaining a wide variety of jobs. Plus, for large amounts pilfered (e.g., from a bank account, a church, or a charitable organization), up to 20 years in prison (state or federal) and fines of over one hundred thousand dollars may be ordered to be paid by the convicted person for felony embezzlement

Define embezzlement. For any person working in a job for a business, company, church or even a charity, and who has access to checkbooks or other electronic means of siphoning off money or charging to a company credit card, all of these can be how an embezzlement defined in an indictment may read.

Types of Fraud Charges. At Barone Defense Firm, our law group is staffed and prepared to help those facing embezzlement charges and other white collar crimes, including those who were acting in a fiduciary relationship (e.g., lawyer or accountant or bookkeeper frauds).

END_OF_DOCUMENT_TOKEN_TO_BE_REPLACED

Soon after you are found guilty or plead guilty to a federal crime you will meet with a United States Probation Officer who will complete a presentence investigation and then prepare a report (PSIR) for the judge’s use at sentencing. If the judge sentences you to prison, then the PSIR will also be used by the Federal Bureau of Prisons (BOP) in making housing and other relevant determinations. Consequently, it is essential that the PSIR be accurate and complete. What follows is a description of the kind of information the probation officer will collect during your interview as well as how to be well prepared for this important process.

Why Is the Federal Presentence Report Prepared? 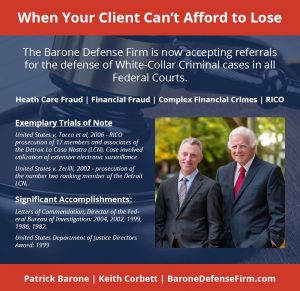 The purpose of the presentence investigation and report is to provide comprehensive information about the offender that is both objective and accurate.  This information and report will be used by the court in making the appropriate sentencing decision. The report also will assist the Bureau of Prisons in making proper determinations relative to the management of the inmates under their supervision.

END_OF_DOCUMENT_TOKEN_TO_BE_REPLACED 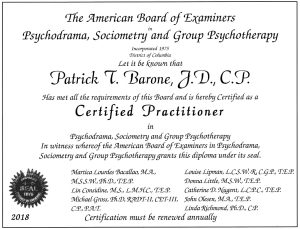 The Barone Defense Firm is pleased to announce that founding member Patrick T. Barone has become the first Michigan lawyer to obtain certification as a Trainer, Educator and Practitioner (TEP) of Psychodrama. Barone sat for the written certification exam on October 23, 2021, and on January 17, 2022, he was advised by the American Board of Psychodrama Examiners (ABE) that he had passed the exam.

Having completed the long journey toward CP and TEP certification, Barone recounts the questions he is most frequently asked, which are first and foremost is “what is psychodrama” and a close second; “what does psychodrama have to do with the practice of law?”

Barone asked himself the same questions when he first attended the Trial Lawyer’s College, the story of which is partially recounted in the 2016 Super Lawyer’s article entitled “Walking in Their Shoes, How Barone Defense Firm uses psychodrama to help clients cope with traumatic events.”

END_OF_DOCUMENT_TOKEN_TO_BE_REPLACED

The Sixth Amendment to the United States Constitution provides that citizens accused of crimes have an absolute right to a speedy, public, trial by an impartial jury. But this right to trial by an independant jury trial was not invented in the United States. In an article in the British Library, Author Geoffrey Robertson remarked that the modern independent jury, and their right to jury nullification, arises out of the rights and limitations originally set forth in the Magna Carta.

Notice the difference in what Robertson indicates and what the U.S. Constitution indicates. Robertson refers to an independent jury whereas our Constitution refers in Article III, Sec. 2, simply to trial by jury, and the Sixth Amendment to an impartial jury. Is this a distinction without a difference? Does the Sixth Amendment, in using the word impartial also connote independence?

In the modern age, this concept of impartiality is most often thought of in the context of the jury’s fact-finding role, in which jurors must be “free of prejudice.” But from a historical perspective, might the word “impartial” as used in the Sixth Amendment also reference impartiality to, and independence from, the law itself?

END_OF_DOCUMENT_TOKEN_TO_BE_REPLACED 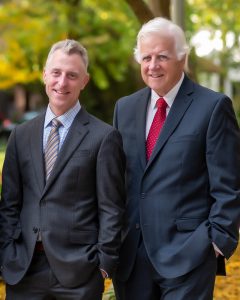 END_OF_DOCUMENT_TOKEN_TO_BE_REPLACED

Once you have been arrested on a Federal Complaint and Warrant, the government must hold a preliminary exam with 14-21 days unless you consent, and good cause is shown. Otherwise, the rules require that you be released. However, you can only be held on a complaint. You cannot be prosecuted further on a complaint and warrant.  To prosecute you further, the government must either file an information or obtain an indictment.

To better understand this, it is helpful to consider that when the government believes that you have committed a felony over which the federal courts have jurisdiction, the prosecution for this crime may be initiated by the government in one of three ways. The most common of the three is the criminal indictment. However, in certain circumstances, the government may determine that there is a need to forgo the grand jury and instead will prepare and file a complaint. This procedure is governed by Rules 3-5.1 of the Federal Rules of Criminal Procedure.

A complaint, and the necessary probable cause to support it, may be based in whole or in part on hearsay. According to Rule 3 of the Federal Rules of Criminal Procedure, a complaint must contain the essential facts of the crime alleged, and must be presented to a magistrate judge, under oath. Rule 4 of the Federal Rules of Criminal Procedure provides that, in reviewing the warrant and deciding whether to issue an arrest warrant, the magistrate judge must determine whether the complaint establishes probable cause to believe 2 things; first that the crime alleged has been committed and that second that the defendant committed it.

END_OF_DOCUMENT_TOKEN_TO_BE_REPLACED

Being Prosecuted in Both State and Federal Court

To begin with, all courts handling criminal cases are in either the Federal or the State court system, but the criminal cases they are empowered to hear, also called their “jurisdiction” differs significantly. Federal court judges have the power to preside over matters involving the U.S. Constitution and over all Federal Laws, which are those passed by the U.S. Congress. State court judges are empowered to preside over cases involving the State Constitution, and over all State laws, meaning those passed by a State or Municipal governing body. State courts can therefore preside over traffic tickets and state misdemeanor and felony cases. The court of primary jurisdiction in the Federal system is called the “district court” whereas the court of primary jurisdiction in the State system is the circuit court.  In the State system, the district court is a lower court, below the circuit court, and is the place all state criminal charges begin.  State felonies must be handled in the circuit court however.