OUID Michigan: Operating under the Influence of Drugs in MI

What is the OUID Drug Meaning, in the Great Lakes State? Drugged driving is illegal in Michigan. An OUID charge is a violation of the “driving while drugged” laws in Michigan.

However, this does not mean that the person is unconscious or blithering. The drugged definition talks in terms of the driver having been negatively impacted by the action of the drug ingested.

Can an OUID Lead to Felony Charges in Michigan?

Yes, any third OWI or OUID in Michigan is a felony crime in Michigan. While an OUID 2 Michigan offense has harsh punishments, a felony can bring a 5-year prison term.

If a driver causes a car accident while driving under the influence of drugs (OUID) which seriously injures someone else, that allegedly impaired motorist can be prosecuted as a felony in Michigan and face up to five (5) years in prison. 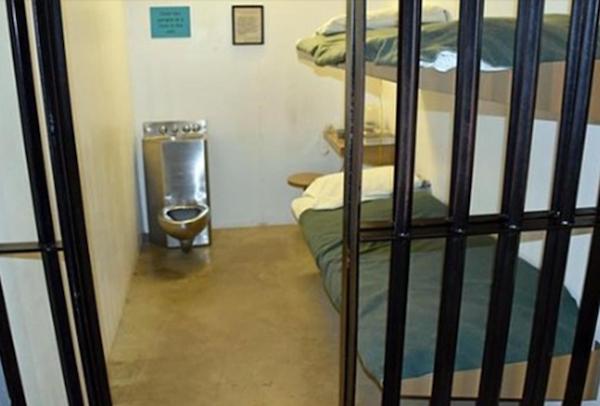 Plus, if the OWID accident results in a fatality, that at-fault driver can face up to fifteen (15) years in state prison. This can be charged against a first offense DUI-OWI driver.

If the person who was killed is a first responder (i.e., an EMT, fireman or police officer), then the maximum sentence the arrested driver faces can be for 20 years in prison. These "special protection" laws have cropped up in many states, in light of the many fatalities first responders suffer.

In Michigan, what does O.U.I.L. Stand For? An OUIL charge is crime is the most common crime in Michigan and the rest of the United States.

Three states, Maine laws, Massachusetts law and Rhode Island statutes use the acronym O.U.I. to designate a person being charged with OUI in those states. Those states have an OUI drugs law, too. 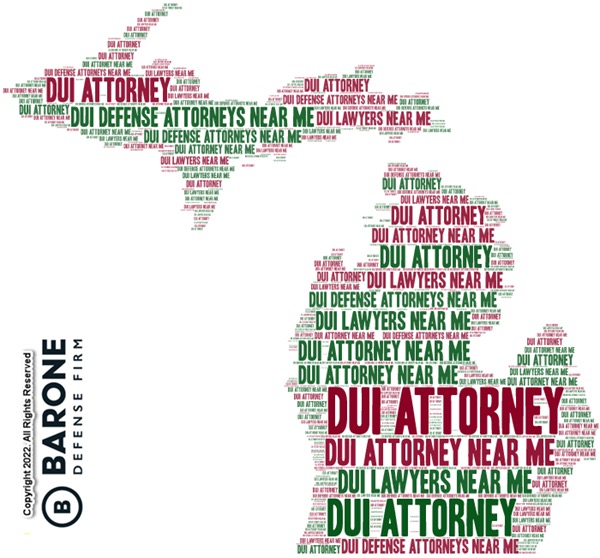 What does O.U.I.D stand for in Michigan? OUID stands for Operating Under the Influence of Drugs and is the driving offense of operating a vehicle while under the influence of drugs.

If convicted of this crime, it is categorized as a severe motor vehicle crime in Michigan. Any conviction can result in hefty penalties and driver license suspension, but only if convicted. Now knowing what an OUID is, and how a conviction can alter your daily life allows you to focus on your criminal offense status and decide whether to hire an OWI-DUI lawyer. 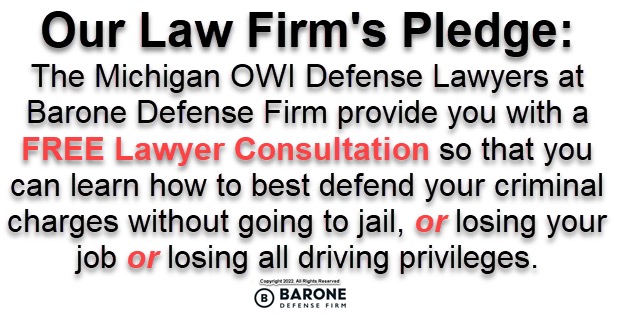 OUID and Child Endangerment in Michigan

Drugged driving could apply to anyone who is operating a vehicle while obtunded by drugs of any type, while a child passenger (who is less than 16 years old) is in that vehicle. This is also sometimes called a child endangerment DUI. If convicted after being charged with child endangerment, this is a form of child abuse in Michigan.

If you have been charged with OUID, it is important to understand the law and how it applies to your situation, and to decide whether you should hire a lawyer. Having a regret for not fighting when you could do so (before conviction) has haunted many thousands of Michiganders over the past 40 years.

After the passage of Michigan's new Marijuana legalization laws in 2018, Michigan driving laws were altered. The previous versions of OUID Michigan law categorized cannabis and marijuana products as illegal for all purposes.

Driving while under the influence of or visibly impaired by drugs, including marijuana, is still illegal. This article will explain the different criminal charges and penalties that can result from driving after consuming different drugs.

Driving (operating) under the influence means driving while your mental acuity has been lessened by alcohol or drugs. Operating any vehicle while under the influence of drugs.is a crime in the Great Lakes State. In fact, such intoxicated or impaired driving due to drug intake is a crime in all states, even if a different abbreviation for the crime is used in other states.

The State of Michigan has very severe penalties for anyone convicted of driving while impaired, whether by drugs or alcohol. Even though some recreational drugs like marijuana have been legalized, that doesn't mean people can ignore impaired driving laws. It's essential to understand how these laws work to avoid getting a OWI for using recreational drugs.

OUID Meaning: Operating under the Influence of Drugs

"OUID" stands for Operating Under the Influence of Drugs, which is generally viewed and treated by the state in the same manner as all other impaired driving crimes in Michigan. But Michigan's OUID laws specifically identify certain types of very dangerous drugs which are not allowed to be taken before or while operating a motor vehicle.

To the surprise of many, this includes some powerful prescribed drugs plus other illicit and recreational drugs. The general rule of thumb is that if prescription drugs impair your ability to operate a motor vehicle, they are not allowed while driving.

Certain schedule 1 and schedule 2 drugs are prohibited for consumption immediately prior to or while driving. Schedule 1 drugs include things such as cannabis, marijuana, heroin, LS, ecstasy, and magic mushrooms.

This can confuse users of recreational marijuana due to its recent legalization in Michigan – these users must still be cognizant that there is no amount of active marijuana that is allowed in their system while driving. Residual traces of the drug are allowed however, as it does not impair the ability of the driver to operate a motor vehicle.

Schedule 2 drugs are a more serious type that can even more dramatically impair a driver’s ability to operate a motor vehicle. These include but are not limited to:

While practically all prescription drugs fall under this category, it is varied in that it also includes illicit drugs that are often used for recreational purposes.

The use by drivers in Michigan of illicit schedule 2 drugs is strictly prohibited regardless of whether or not it impairs driving. The use of prescription drugs and being prosecuted for a OUID is a highly desirable type of case for an OUID lawyer in MI.

For prescribed meds, it is only illegal to operate a vehicle while using prescription drugs if the prescribed substances have interfered with or impaired that Rx user's faculties. This question of fact would be for a jury (or possibly a judge, acting with a jury, if your OWI attorney waives a jury trial) to determine.

Michigan has a zero-tolerance policy for drugs while driving. This is especially important considering the state's legalization of recreational marijuana in 2018. OUID charges fall under the category of OWI violations listed in MCL 257.625, specifically subsections (4), (5), (7), and (8).

In 2018, Michigan legalized recreational marijuana use. OWI violations under MCL fall under the category of OUID charges. Fines, driver license suspension, and even serving prison time all can be imposed for certain an OUID convictions. This is especially true if this is not your first offense.

Operating With Presence of a Controlled Substance

A repeat offence OUID, especially if injuries or a fatality is involved, will implicate serious potential prison terms, if convicted. First time offenses are normally misdemeanors and can carry the following penalties shown on the Michigan OWI/OUID Penalties Chart set forth below: 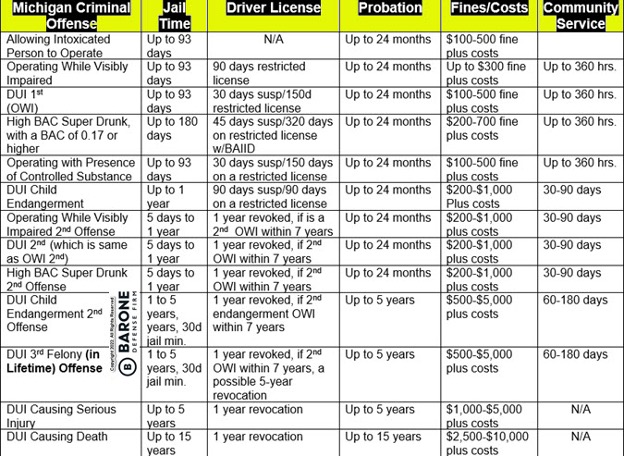 The use of illicit schedule 2 drugs is strictly prohibited, regardless of whether or not they impair driving ability.

The 2018 legalization of recreational marijuana in the state led to a rise in OWI violations.

The legalization of recreational marijuana in Michigan in 2018 brought OUID charges to now fall under the heading of OWI offences listed in MCL.

Call today to start lifting the stress off your shoulders. Our criminal law attorneys answer 24 hours a day at our law office. Use our east-to recall toll-free number, 1-877-ALL-MICH or 877-255-6424, for a free criminal case review.

By calling for your FREE lawyer consultation, what do you have to lose? Our attorneys near me will assist you in learning how to protect yourself from a possible unwarranted impaired driving conviction.

The Michigan attorneys near me at Barone Defense Firm are legal book authors on THIS topic. This is one reason we travel the entire Great Lakes State (thus ALL-MICH, in our phone number), to help citizens in legal trouble in Michigan for alleged criminal law violations. Call now, and start regaining your peace and sleeping soundly. 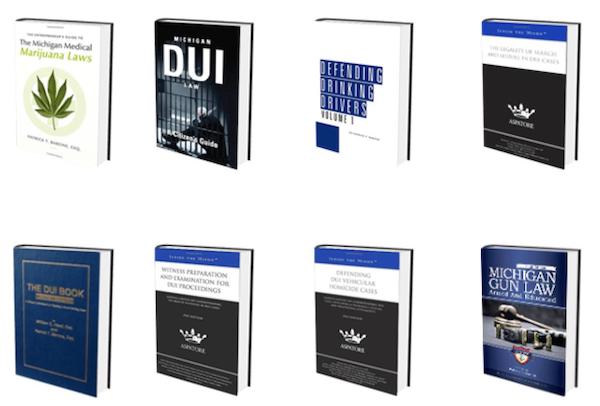